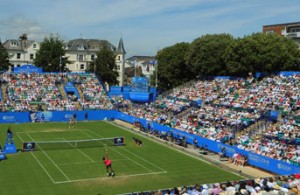 Many of the world’s leading tennis players are coming to Eastbourne this weekend for the Aegon International 2013, which takes place at Devonshire Park in Eastbourne 15 – 22 June 2013.

Twelve of the top twenty women players will feature, including defending champion Tamira Paszek (AUT), World Number 4 Agnieska Radwanska (POL), who is the highest ranked player to enter the event so far, and Marion Bartoli (FRA), ranked World Number 6. The championship will also be a chance to see British Number 1 Laura Robson in action.

For Aegon International 2013 news and tickets go to the Lawn Tennis Association website www.lta.org.uk or to www.visiteastbourne.com/events/tennis