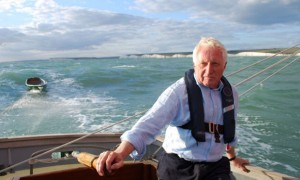 Beachy Head and the cliffs of the Seven Sisters, just along the coast from Eastbourne, feature to spectacular effect in the BBC television programme Britain and the Sea. In the second episode, shown on Sunday 24th November, well-known TV presenter David Dimbleby sails his boat Rocket along the south coast of Britain from Lymington in Hampshire to Dover in Kent, as part of his voyage around the UK.

In the programme we see stunning shots of the undulating line of cliffs which make up the Seven Sisters and Beachy Head from the vantage point of Dimbleby’s boat. He uses the sight as an opportunity to explain how drawings were once used to help sailors pilot their vessels safely when close to land, illustrating the point with a quick sketch.

For further information go to www.bbc.co.uk

Beachy Head and the surrounding area have been used many times as locations for film and TV. For further information look on the website www.beachyhead.org.uk