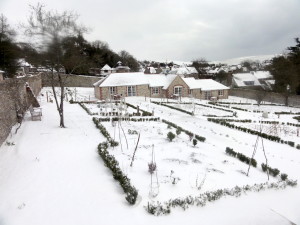 I have always wanted to write a story that can be read over and over again and will be enjoyed by all that read it.

I don’t know if this is it.

But, snuggle up, belt in, pour another brandy, we are off.

What some unlucky people don’t realise is that the arch to the Walled Garden occasionally acts as a portal to another dimension. One where animals talk and adventures are to be had. No, not a bit like Narnia. Because in this dimension everybody and everything get on and try and be kind to each other. But that doesn’t mean there aren’t adventures to be had.

Come with me. Don’t just walk through the arch, rub the plaque on the left hand side with your left hand whilst hopping on your left leg and whispering “Gibby Gibby Slump Gloop”.

It won’t make a blind bit of difference but it will make you laugh and that is what The Walled Garden is all about.

Step through and “whoosh” you are transported.

The sky is dark. The temperature has fallen. Stick out your tongue, yes!! It’s snowing, not normal snow, but rainbow snow, blues and greens and orange and red. But no yellow – never, ever eat yellow snow (That’s dog wee, and it’s horrid, not that I know for sure, I just reckon, don’t you.) Where were we, multi coloured snow, tongue out, that’s right, now because it’s Christmas, the snow tastes of Christmas, one second, mince pies, the next pigs in blankets, the next mulled wine (if you happen to be over 18.) and finally marzipan and chocolate coins – just watch out for the green snow flakes – Brussel sprouts – that’s all I’m saying.

The snow gathers around your ankles and you have to lift your legs to get through, the lights are lit and Christmas lights are on and delicious smells are in the air, it feels like Christmas, but it doesn’t sound like Christmas does it. But wait, stop and listen really carefully, up in the top left corner by the fig tree, just where those spaniels Tonks and Mungo have their noses buried in the snow (Did you know dogs sense of smell is so much better than ours – why do you think they walk away from the room when they trump!!), there is a beautiful song coming through the air, it’s the resident Mouse, Michael Figgs and his family singing “Whilst mice nibbled their cheese at night they gave Mrs BH a fright, she dropped her plate on the floor and for the mice there was more.” – Well, what did you expect, a full Carol – make up your own.

Run and skip over to the grass in front of Folly cottage where the gardener has planted a new bed, which he hasn’t told Mr BH about, and couldn’t think of a way of telling him.

Lie down and make a snow angel, but as you do it, watch the clock tower and if you are lucky you will see the snow flakes turn a brilliant white and form into beautiful snow angels that dance and fly round and round in circles until they reach the moon and explode into meringue flavoured snow flakes.

You now know that the snow is magical in the Walled Garden, but I guess you might not yet believe me, so two things should change your mind. Firstly, make a snowball and through it as hard as you can at the wall, but make sure you duck quickly as it bounces off and heads straight for your nose – but don’t worry if it gets you, because it transforms into a shield which means you are kept warm and dry and any snowballs that hit you burst into little fireworks than go bang in the sky. Now, make a snowman and a snowlady, and whisper into their ears – of course they have ears – “Flag wort Mc Spurtle burger.” And watch them dance around the Quince tree until they just become a blur of light and movement and turn into the most delicious marshmallow candy floss you have ever tasted, chocolate, cinnamon, advocaat (Ask your Grannie.) and nougat.

Time to go home now, walk away from the garden, but just as you are about to walk through the arch, turn round and there is The Gardener, smiling to himself, sweeping away the leaves. Was it all a trick, did you imagine it all. May be, may be not, but I think you can see him just popping a marshmallow in to his mouth and muttering something about yellow snow. Whilst Tonks and Mungo run past you, giggling.

Older Story
Is the Tiger Inn the Perfect Pub?
Newer Story
Best Walks with a View