The Guardian - A great walk to a great pub: the Tiger Inn, East Sussex 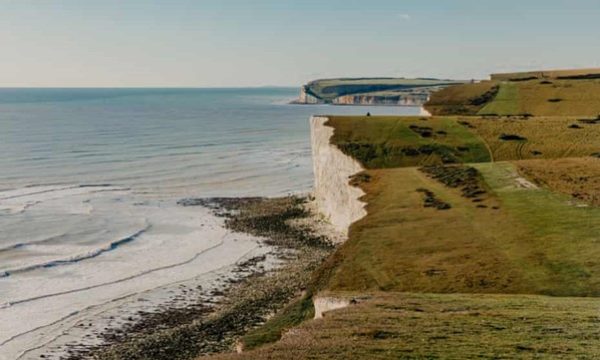 Stroll over the Seven Sisters cliffs, then refuel in a quintessential English pub on a pretty village green

Autumn bluster is in the air as I set off from the car park, with rain clouds roiling overhead and rooks exploding from the treetops like shrapnel. Down on the village green, the cosy Tiger Inn looks tempting, but I am saving its rewards for later. Until then, up on the open downs, with a stiff south-westerly straight off the sea, I may be in for a battering.

The picturesque village of East Dean lies just off the A259, between Seaford and Eastbourne, and makes a perfect gateway to the Seven Sisters country park. If you don’t know the name, you’ll recognise the landscape from book covers and film backdrops, its rolling green hills and towering chalk cliffs suggesting some nostalgic notion of pastoral England.

To the geologist, these cliffs reveal where the broad chalk band of the South Downs, laid down 80 million years ago, reaches the English Channel, only to be cheese-wired away by the relentless waves. The Sisters are peaks between ancient river valleys: Haven Brow, rising 77 metres above Cuckmere Haven at the western end, is the highest of the seven. For the naturalist, the surrounding grassland means special flora and fauna; for historians, it means Saxon churches, smugglers’ tales and iron age earthworks. 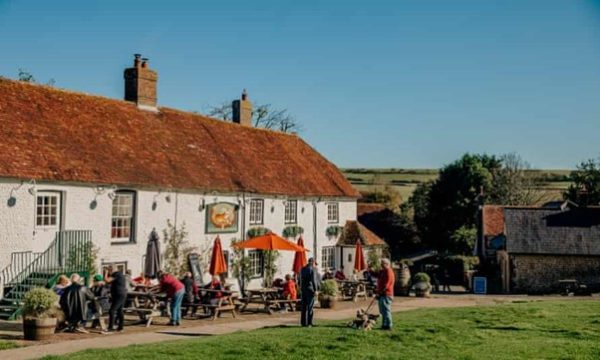 This place is too well known to be anyone’s “best-kept secret”, but it never disappoints. The landscape is on such a grand scale that it easily absorbs the day trippers who beetle over its muscular contours. Each day brings new skies, each season new attractions, and there are enough trails that I can find a new route each time, with its own take on those stunning cliffs.

Today, I head south from East Dean village green, following a no-through road (Went Way) to a gate, then crossing a damp field to a small wood. The track climbs through the trees, tunnelling towards an oval of light that promises a view beyond. I emerge to find the celebrated panorama laid out before me. Below and to the east is the dip of Birling Gap, with its hotel, cafe, and beach, from where the cliff line rises again to the prominent Belle Tout lighthouse and on towards Beachy Head. Ahead lies the sea, all scudding cloud shadows, and spotlight sunbeams. 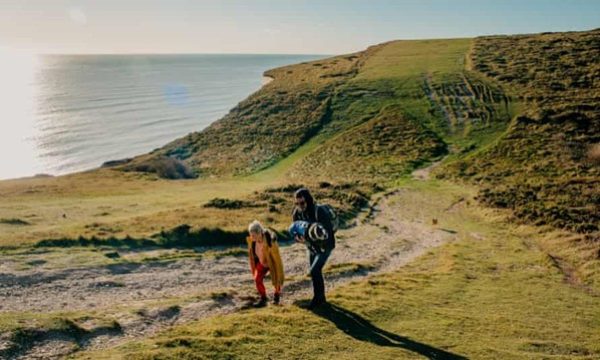 No rain so far. I press on over sheep-cropped sward and past wind-stunted hawthorns to a red-roofed barn, from where the track descends gently towards the cliffs. At a cluster of low scrub, where the path continues to Birling Gap, I head right, along the cliff top. I have now joined the 100-mile South Downs Way which would, had I the time and energy, take me all the way to Winchester.

The cliff path is a switchback ride, the roar of the waves turning abruptly on and off as its undulations take me in and out of the wind. In summer, chalkhill blues and other butterflies dance over the flower-studded grass. Today, jackdaws ride the up-draughts and the odd wheatear flutters ahead, the last of many southbound migrants for which these cliffs mark a final departure point. I gaze seawards in hope of spotting a passing peregrine but keep well back from the edge: it’s a long way down. 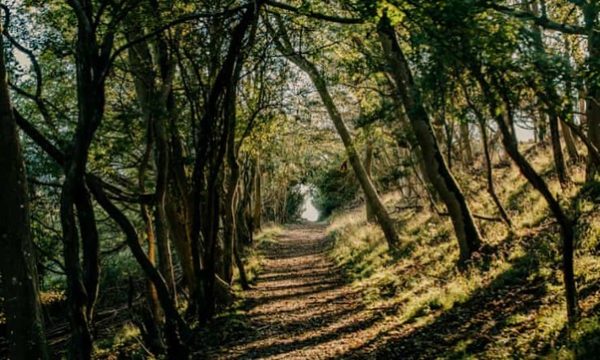 A third of the way along, I reach a flint-studded monument commemorating the 1926 purchase of the Crowlink Valley (for “the use and enjoyment of the nation”). From here, a shorter circuit leads back inland to East Dean, but I press on to complete the Sisters. After another 45 minutes of ups and downs, I’ve crested Haven Brow and am looking west across the floodplain and meander loops of the Cuckmere Valley. Above the river mouth, the famous Coastguard Cottages – also regulars on those film sets, and book covers – cling precariously to the cliffs.

The landscape is on such a grand scale that it easily absorbs the day trippers who beetle over its muscular contours.

A National Trust signpost on Haven Brow offers a choice of routes. Leaving the cliffs, I turn right along a gentler path inland. Down on the valley floor, I meet a paved track that leads north to the country park visitor centre (in an 18th-century barn, with tearoom and toilets). From here I could complete a longer return to East Dean through deep, dark Friston Forest, north of the A259. But I can’t get enough of those cliffs, so cut across on to a raised bank and follow the Cuckmere back towards the sea.

This little loop around Cuckmere Haven is bird country. In a month or so, wigeon and other wintering wildfowl will be flocking to graze the salt marsh. Today there are little egrets working the riverbank and redshanks robing the tidal pools. Past visits have brought me kingfishers and, on one red-letter day, a wandering osprey. 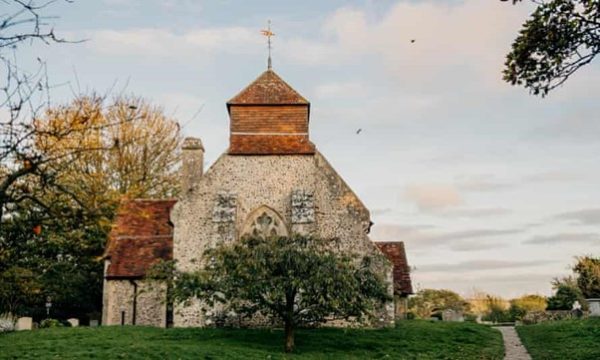 Reaching the beach, I tramp left across the shingle towards the foot of Haven Brow, its massive chalk buttress rearing defiantly above the waves. From here, a steep zigzag path cut into the hillside returns me to that NT signpost, where a kestrel now hangs motionless in the breeze. I set off east again, retracing my steps along the clifftop, with the low sun behind me now illuminating the panorama ahead. Reaching the last dip before the monument, I pass through a sheep gate into Crowlink Valley and cut back inland, for the last hour, which is a gentle one.

My route follows a farm track north across fields to the hamlet of Crowlink – its houses hidden by the downs until you find yourself among them – then continues up a road to Friston Church, a building of Saxon origins opposite a picture-perfect pond that was listed in the Domesday Book. Across the churchyard, a gate opens on to Hobb’s Eares field and the final descent to East Dean. Rabbits scuttle for the hedges as I lengthen my stride, the Tiger Inn in sight. 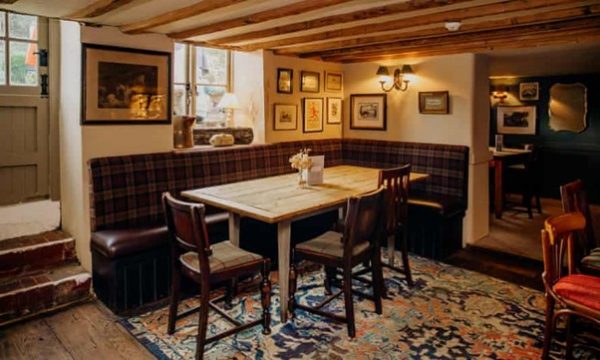 This picturesque pub sits among the flint-walled cottages that surround East Dean’s village green. There is said to have been a hostelry here since the 12th century: the “tiger” bit is thought to refer to the three leopards crest of the de Dene family. The present structure dates from the 16th century, as evident in its oak beams. Local ales on tap include Harvey’s Sussex Best bitter (£5.50 a pint) and Longman Long Blonde (£4.40), while pub fare includes “catch of the day” from Newhaven, and a vegan “not-tiger burger” (£13.50). Book ahead in summer, when it’s busy with thirsty hikers and drinkers spill out on to the green. In winter, the low ceilings and blazing fire suggest the smugglers’ retreat that, according to legend, this once was.

The pub has five en suite rooms upstairs (from £100 B&B). It also has nine self-catering cottages around a walled garden behind the pub, sleeping between two and six (from £405 for a long weekend). For a unique alternative, on the cliff top a mile from the inn and a short walk from Birling Gap is the Belle Tout lighthouse (from £175 B&B). It has six rooms and an extraordinary lounge with 360-degree vistas over the South Downs and the Channel.