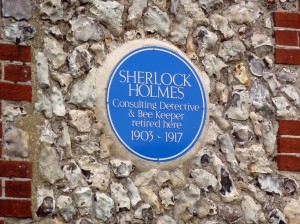 What connects Sherlock Holmes, fictional star of countless adventures and adaptations, to East Dean, the sleepy village that lies a mile from Beachy Head? Well, amateur sleuths have deduced that the famous detective may have retired there.

It’s true that the connections are, well, tenuous. But there are connections, and there is a reasonable case to suggest that East Dean is where Sherlock Holmes retired.

Let’s look at the case:

Holmes retired to the Downs

According to the preface to His Last Bow, Holmes retired to “a small farm upon the Downs, five miles from Eastbourne”.

The celebrated author was born nearby, in Crowborough, East Sussex, and is believed to have visited East Dean in later years.

Bees like shelter, which rules out a number of potential retirement spots. The village of East Dean, sheltered from the coastal gales, is still a contender.

The Sherlock Holmes Society puts him in the area

Well, to be precise, a former Chairman of the Sherlock Holmes Society of London reckoned that a house on the village Green opposite the old Farm (New House Farm) was a plausible location for Holmes’ retirement.

So when you next explore Beachy Head – or notice the blue plaque announcing the spot of Holmes’ retirement – ask yourself if East Dean might indeed be the place where Doyle retired his fictional hero. Or try the Sherlock Holmes walk:

It starts at Sherlock Holmes’ retirement home and follows the route through Friston Church and the grave stone marked “washed ashore”. Then follow a route over the South Downs, through the old smuggling village of Crowlink (famous for Crowlink gin) and on to the chalk cliffs on the coastline, returning via the red barn and then back to East Dean. These are the footsteps Sherlock Holmes may have taken when he was out studying his bees and when he met Mary Russell and his adventures with her began.