The Tiger is a Roaring Success 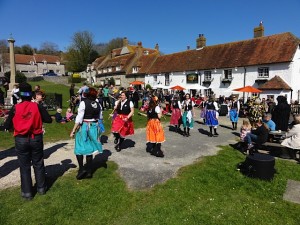 The Tiger Inn in East Dean, one of the most well-known and best loved pubs in East Sussex, has been named “Pub of the Year” at the Sovereign FM Awards 2012.  The pub was described in nominations as “the hub of the village” and a “quintessentially English pub with a warm welcome and a charming feel”.

The Awards ceremony took place on Friday 30th November at the Grand Hotel in Eastbourne, where a total of 14 awards were given to businesses and individuals from Eastbourne and the surrounding area across a range of categories.

“This award means a great deal to us,” says Jacques Pienaar, General Manager of The Tiger.  “We welcome a great many visitors to the area but we are also proud of the pub’s popularity as a local meeting-place.  The recognition and support of the community is of vital importance to us.”

This is the second time this year that The Tiger has been recognised for its excellent food and beer and cosy atmosphere.  The pub recently received an award from the All Party Parliamentary Beer Group, presented by Lewes MP Norman Baker.

The Tiger is also the Brewery Tap for the Beachy Head Brewery.  The Brewery’s “Famous Christmas Ale” recently won the highly coveted “CAMRA Sussex Microbrew of the Festival” award at the Eastbourne Beer Festival 2012.

The Tiger has gone from strength to strength in recent years.  The pub was closed and boarded up four years ago, but is now a thriving enterprise at the heart of the community.  It plays a key role in the area’s tourism product, attracting large numbers of visitors and locals alike with its superb location on the village green in East Dean, delicious food, wide range of drinks and welcoming atmosphere.  It also provides a major boost to the local economy:  produce is locally sourced wherever possible; the pub uses a range of suppliers; and employs around 30 people in total.

Older Story
Come and stay in our award-winning cottages
Newer Story
A Beautiful Winter Walk Dinner in a Cosy Pub and a Stay in a Delightful Cottage All in One Spot!